China Citizen Watch, the official Chinese division of the Japanese watch giant Citizen, and Bulova Watch Company (a Citizen brand in the U.S.)  have both been affected because China Citizen Watch or its hosting company left an unsecured RSYNC server online with more than 150TB of files.

Cursory skimming of the files, necessitated by Citizen Watch’s repeated failures to respond to security alerts I sent to them, indicated that the RSYNC contained copies of backups from various workstations and email systems for about 500 internal Citizen employees and staff as well as many from Bulova. Some files on the system also contained usernames, emails and plain text passwords all saved in .csv formatted files with no encryption to protect them and no password required to access them.  The bulk of the data on the RSYNC appeared to consist of email inboxes and all related data, Sent, Trash, Inbox etc.

The leak also affected Vagary.cn, Bulova.com.cn and various other small brands owned and controlled by Citizen.

Attribution was fairly easy. Cursory inspection of some files revealed that their host was upmcn.com and that Citizen was likely the owner of the data. The email inbox also went to an internal domain registered to Citizen, and the inbox configuration all had Citizen smtp details within them, as illustrated in the figure below:

The data was discovered on November 22, 2019. Contact to China Citizen Watch was first made to their Chinese email address within 48 hours. Citizen did not respond to the emailed notification, but I could see that my email notification to them showed up in their backup.

On December 2, I tried contacting the host, upmcn.com, and sent a third notification to China Citizen Watch.

Neither responded at all.

On December 3, I contacted Citizen UK in the hope that they would be able to ensure that Citizen Watch China would respond. Over the course of the next week, we would go back and forth, but nothing got done, and on December 10th, they informed me that they had forwarded the information to the American CTO.

The data continued to leak. 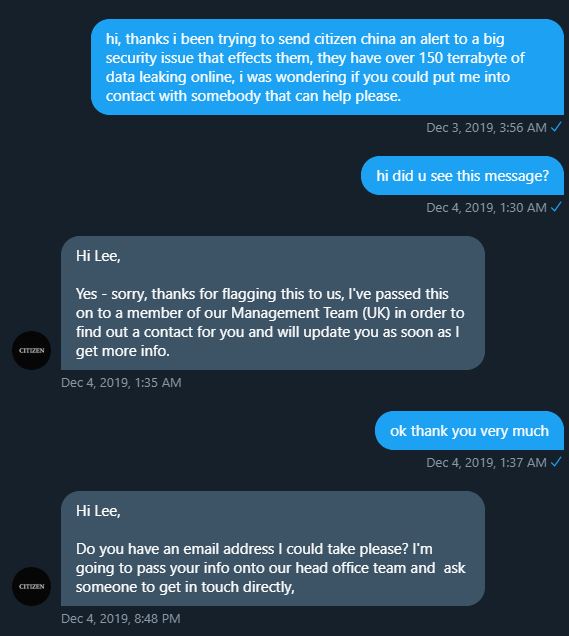 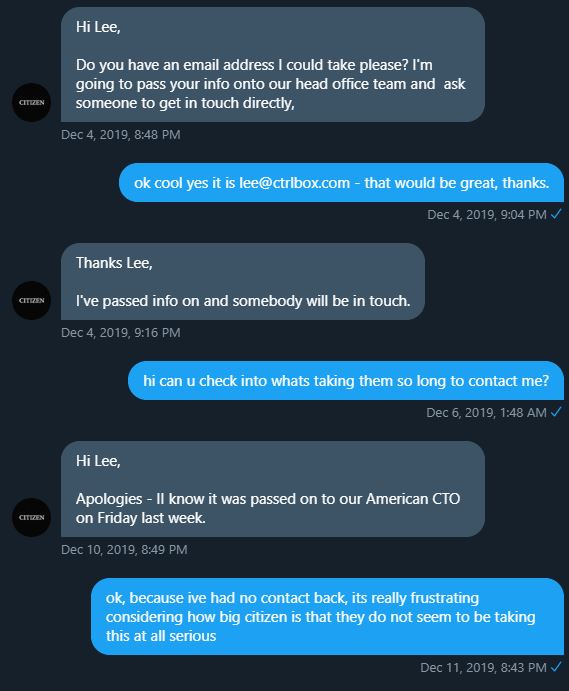 By six days after contacting Citizen Watch UK, nothing had changed.

In addition to banging my head against the wall by repeatedly trying to notify them via email, I also attempted to contact them  via their corporate webform request and also via their web chat.  Their web chat appeared to be mostly offline, even when it was supposed to be online.

I also tried making contact via LinkedIn to various higher level Citizen staff from the U.S., Canada, and Japan.  Not one of the following individuals responded at all:

On December 18, I sent a 6th email notification, this time using an email address I had discovered in a sample of their data. That seemed to get their attention, and in reply, they asked for my IP address and the time at which I had accessed their RSYNC. I suddenly found myself concerned that they might try to shoot the messenger.

It should never have been that difficult. A major corporation like Citizen Watch should have better incident response than this. China Citizen Watch may not be directly at fault  as they are using a service called upmcn.com who explains what they do for Citizen:

Using remote cloud backup services is becoming a much more common thing these days, specially for big companies like China Citizen Watch who  have hundreds of servers and systems linked and working together to make their company run. Both the Citizen and Bulova-branded watches are very popular watches on the market. How can they not be checking for security notifications or responding to them?

Sadly, what happened here is nothing new or different. During this same period, I was also notifying Adidas, SonyLIV, and a number of hosting companies who also left RSYNC backups open or other services unsecured. Thankfully, it didn’t take as many notifications to get responses from them.

But if a big company like China Citizen Watch can’t get incident response right, doesn’t acknowledge notifications, and doesn’t follow up properly, well, that doesn’t bode well for smaller entities.

So I sent them yet one more notification to alert them they still had access via http and that they needed to restrict the direct and domain access as various domains was attached to the IP address, all of which showed the same login interface.

This time, they responded promptly, thanking me for my multiple emails and saying that they “have taken steps.”