The hacktivist known as ElSurveillance, whose operation is #EscortsOffline, is back with two more data dumps from dating sites.

The first target was 24luv.com, where ElSurveillance claims he hacked and dumped 92,937 users’ email addresses and plain-text passwords. 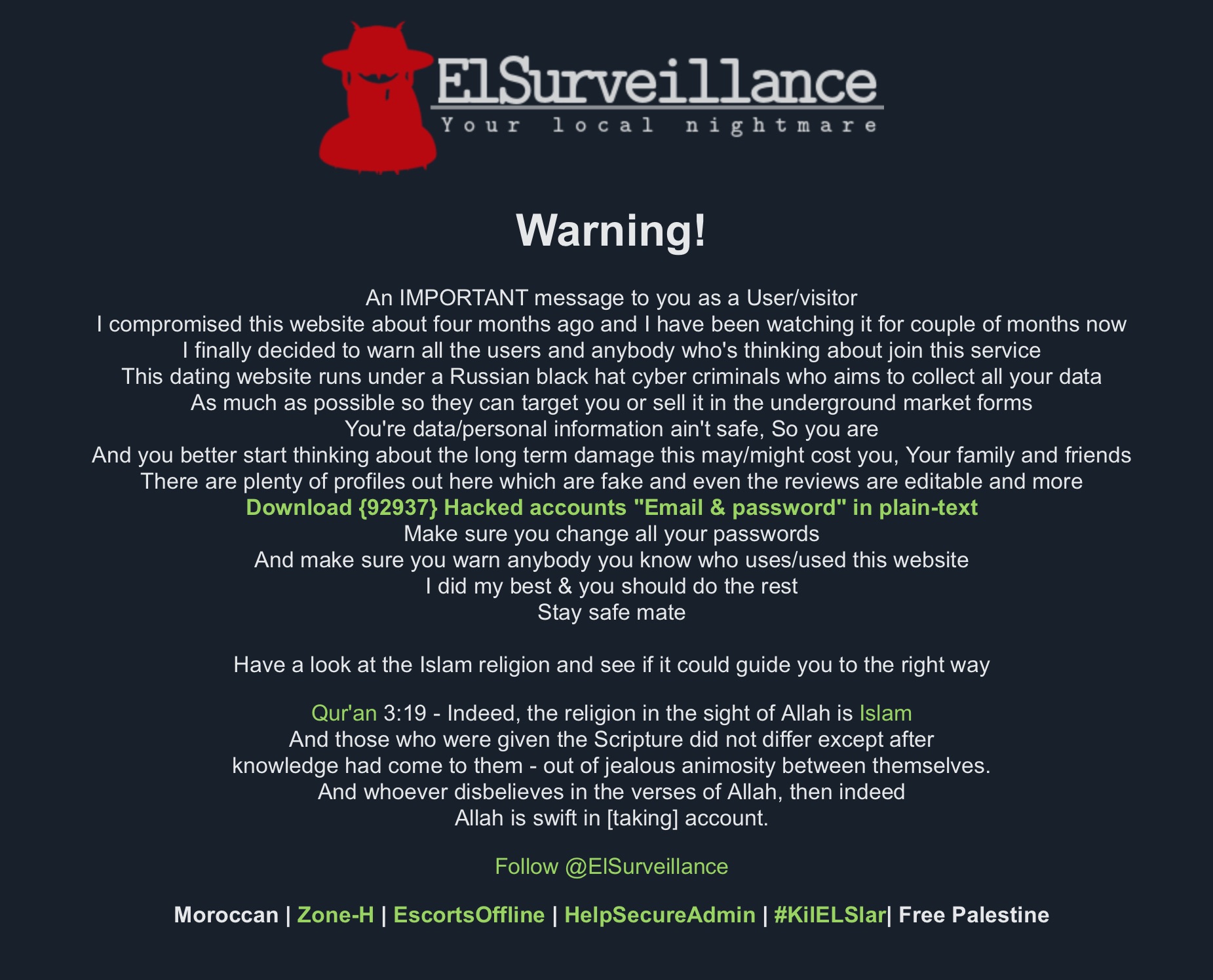 In a defacement on the site, ElSurveillance writes, in part:

I compromised this website about four months ago and I have been watching it for couple of months now
I finally decided to warn all the users and anybody who’s thinking about join this service
This dating website runs under a Russian black hat cyber criminals who aims to collect all your data
As much as possible so they can target you or sell it in the underground market forms
You’re data/personal information ain’t safe, So you are
And you better start thinking about the long term damage this may/might cost you, Your family and friends
There are plenty of profiles out here which are fake and even the reviews are editable and more
Download {92937} Hacked accounts “Email & password” in plain-text
Make sure you change all your passwords
And make sure you warn anybody you know who uses/used this website
I did my best & you should do the rest
Stay safe mate

The message was followed by an encouragement to users to follow Islam and the way of Allah.

I asked ElSurveillance if he was serious about the claim that the site was run by Russian blackhats or if he was just trying to scare users off.  In a private chat, he replied that all of the sites that he has been leaking data from are developed by the same developers:

They edited a profile that I created and the reviews

I have been monitoring them for 2 months, And I don’t have a reason why should I scare the users, They will get punished anyway 🙂

ElSurveillance tells DataBreaches.net that in the next few days, he plans to include all the admin identities and login details in a final dump that will include more than 50 dating websites/databases and over 5 million emails and passwords in plain-text.

“I already got the real identities of the developer(s),” ElSurveillance tells this site, “But still trying to figure out if the developer(s) and who runs the sites are the same person/group”

A site lookup shows that both 24luv.com and freedateusa.com are hosted on datingcreator.com and are registered in Russia.

When asked if he had any evidence that the sites are actually selling user data on the dark web, ElSurveillance acknowledged that he had no proof, as he hadn’t looked:

But from the way how I have seen they collect/collected the users data, I strongly believe it’s only to be sold, These targets seems to me never been hacked before “Which I’m surprised” because they all have the same multiple vulnerabilities and the passwords are easy to guess, I never visited any darkweb before to see wither they already are in the darkweb or no, But it could be for the future plan

In any event, we should expect another and larger data dump from ElSurveillance within the week.