US authorities have seized this week the domain of WeLeakInfo.com, an online service that for the past three years has been selling access to data hacked from other websites.

In a press release yesterday, the US Department of Justice asked the public for help and tips in identifying the website’s owners. A day later, today, Dutch police arrested a 22-year-old man in Arnhem on suspicion of operating the site.

WASHINGTON – Today, the Federal Bureau of Investigation and the U.S. Department of Justice announced that they have seized the internet domain name weleakinfo.com.  The announcement was made by U.S. Attorney Jessie K. Liu of the District of Columbia and Special Agent in Charge Timothy M. Dunham of the FBI’s Washington Field Office.

The website had claimed to provide its users a search engine to review and obtain the personal information illegally obtained in over 10,000 data breaches containing over 12 billion indexed records – including, for example, names, email addresses, usernames, phone numbers, and passwords for online accounts.  The website sold subscriptions so that any user could access the results of these data breaches, with subscriptions providing unlimited searches and access during the subscription period (one day, one week, one month, or three months).

With execution of the warrant, the seized domain name – weleakinfo.com – is now in the custody of the federal government, effectively suspending the website’s operation.  Visitors to the site will now find a seizure banner that notifies them that the domain name has been seized by federal authorities.  The U.S. District Court for the District of Columbia issued the seizure warrant.

Any persons having information concerning weleakinfo.com or its owners and operators are encouraged to provide that information by filing a complaint (referencing #weleakinfo in the “Description of Incident” field) with the FBI’s Internet Crime Complaint Center (IC3) at https://www.ic3.gov/complaint/default.aspx.

The seizure is part of a comprehensive law enforcement action taken by the FBI, the U.S. Attorney’s Office for the District of Columbia, and the Department of Justice’s Computer Crime and Intellectual Property Section, along with international law enforcement, including the United Kingdom’s National Crime Agency, the Netherlands National Police Corps, the German Bundeskriminalamt (the Federal Criminal Police Office of Germany), and the Police Service of Northern Ireland. 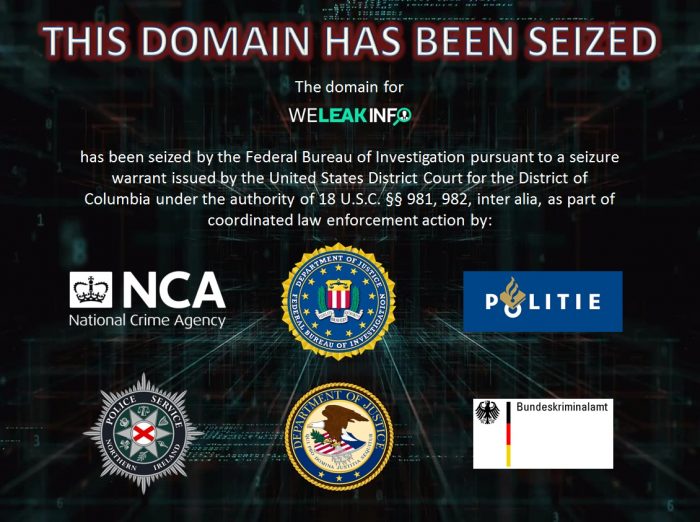