Hackers claim to have successfully attacked a multinational  conglomerate that is described as having the largest market capitalization on Bangladesh’s stock market.

BEXIMCO’s newest vertical is its PPE Division. In May, 2020, BEXIMCO began shipping millions of PPE gowns, masks, and coveralls to the U.S., and its pharmaceutical division became the world’s first company to start supplying the generic version of the antiviral medication Remdevisir for COVID-19 treatment after the drug was approved by the U.S. Food and Drug Administration for emergency use.

The total revenue of the BEXIMO group stands in excess of $1 billion USD each year. And that made it an attractive target for hackers.

This week, ALTDOS hackers contacted DataBreaches.net to report that they had hacked BEXIMCO in December, but BEXIMCO had not responded to their demands.

[Note: DataBreaches.net refers to ALTDOS in the plural because a spokesperson claims that ALTDOS has multiple members, but DataBreaches.net really has no proof as to whether ALTDOS is one person, a few, or many. Previous coverage of ALTDOS’s claimed hacks are linked from here.]

“In total, ALTDOS has stolen hundreds of gigabytes of files, source coding and databases from 34 of Beximco websites, including its telecom subsidiary – BOL-ONLINE.COM,”  a spokesperson wrote to DataBreaches.net.

DataBreaches.net sent email inquiries to a few of the email addresses in the file listed as being involved in security or network. A few bounced back. Others were seemingly delivered, but DataBreaches.net received no reply. Nor did the conglomerate’s corporate media department reply to an inquiry sent 24 hours ago.

ALTDOS provided screencaps showing the names of folders in various directories, and the amount of data being downloaded (or in this case, 13.6 GB compressed size for 42 compressed web site folders,  one of which is likely just a test folder). 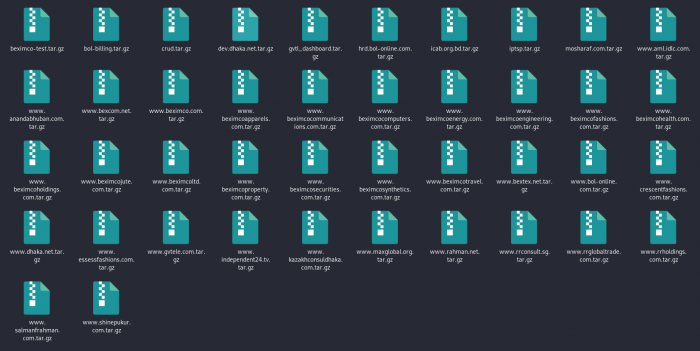 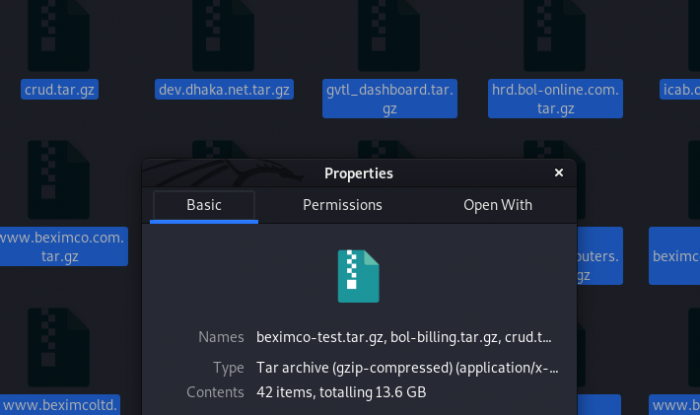 Another file called “payment_info” contained what appeared to be more than 65,000 rows with payment records, but there was nothing in there that would be problematic in terms of bank account numbers, credit account numbers, or parties’ names, etc.

Of note, DataBreaches.net did not see any evidence that ALTDOS had obtained any corporate IP, trade secrets, or confidential communications from any of the conglomerate’s divisions. When asked about other proof or types of files, an ALTDOS spokesperson said they were currently going through all the sql databases they had exfiltrated to evaluate the information they had obtained and would be providing more proof and details in the future.

This story will be updated if more information is obtained or a response is received from the conglomerate. While Bangladeshi law provides for criminal consequences to hackers, if caught and convicted,  it is not clear that the conglomerate would have any breach notification obligations under Bangladeshi law if the hackers acquired personal information of employees and/or customers. There appear to be obligations about reasonable security, but there does not seem to be any obligation to notify employees or customers in the event of a data breach involving personal information. A review of Bangladeshi data protection laws can be found here. If this site has mis-stated the country’s breach notification laws, please let us know.