[CORRECTED and UPDATED] Hacking America: U.S. teen claims he had access to all state domains registered on .us TLD

Home / [CORRECTED and UPDATED] Hacking America: U.S. teen claims he had access to all state domains registered on .us TLD

[CORRECTED and UPDATED] Hacking America: U.S. teen claims he had access to all state domains registered on .us TLD

UPDATE 9-21-2016 Over the past two days, DataBreaches.net provided the First Bank of Ohio with samples from two files that “Fear” claimed were from them. They have firmly denied that either file is theirs:

These have nothing to do with us. The second group are businesses that are applying for liquor licenses in Ohio.

The second file they are referring to is the file that had been mentioned in my first post on the claimed hack, below. The newer file is a file “Fear” has described elsewhere as “Ohio_transactions_2016.csv.”

So once again, “Fear’s” claims have been refuted.

In reporting on the claims of a teenager known as “Fear,” this site noted what he had claimed and what he could back, but also noted where he had not provided any proof of claims. In fact, the headline had the word “claims” in it specifically because not all statements were proven.

Following publication of the article, this blogger continued trying to get @hackinyolife to provide more proof of his claims. Late last night, Fear began providing more documentation. A review of what he provided indicated that in some cases, he either did not understand what he was looking at, or had flat-out misrepresented some things. As one example, he had never specifically mentioned Neustar in talking to this site, yet when other journalists contacted him to follow up, he told them he had hacked them. He admitted to this site last night that he had not hacked Neustar.

After a lengthy chat with Fear last night, and after looking at the additional materials he provided last night, it also seems clear that he did not obtain any prescription monitoring database from Florida. While there was information pertaining to medical professionals, it was mostly information that would be publicly available such as in license verification, although the state’s public portal did not reveal all the fields that were in the underlying table (e.g., practitioners’ addresses, phone numbers, and email addresses would not be shown in the public results although they were in the state’s records).

DataBreaches.net informed Fear that it would be issuing a correction to its story and would be reporting that he didn’t have what he had claimed to have.  It now appears that he has issued a statement that he calls “The Truth:”

Today I will be revealing the truth.

I did not hack Neustar, i lied to media to troll them.
I hacked into 38 government ftp servers, and had access to states data.
The bank breaches included has nothing to do with my breach on the ftps.
I gained access to the banks because i breached north dakota bank back in early 2016.
I had access to gov banks in each state. So i used it to troll the media.

Yes, the government did get hacked, along with social security numbers from the back, tax papers, voting data.

But Neustar was a mirage to troll the media.

Fear’s newest claims were not backed with any proof of some of the claims above. He only provided this site with one screenshot with a few SSN that is unlikely to have come from any of the servers he claims to have breached.

At this point, then, DataBreaches.net believes that even though Fear did provide some evidence of hacking servers associated with states and did obtain some data, and although he had previously provided evidence of a hack involving the Bank of North Dakota, specific claims he made about the new hacking should be treated with extreme skepticism if not outright rejection.

DataBreaches.net apologizes to its readers for having provided inaccurate information.

Sad to know .us domains are so unsecure

A private message to DataBreaches.net on Saturday evening was the prelude to a young hacker downloading tremendous amounts of data from states.

Over the next few hours, a teenage hacker known to DataBreaches.net from his past hacking activities would remind us once again just how insecure everything was, showing this blogger samples of files that he obtained in a hack that not only gave him access to every state with a domain on .us, but also to some .gov domains such as the U.S. Department of Education.

I gained access to an ftp server, that listed access to all the ftp’s on .us domains, and those .us domains were hosted along with .gov , so I was able to access everything they hosted, such as, public data, private data, source codes etc…

He declined to reveal what .gov sites, other than USED, he was able to access, but did expand a bit on his previous answer, telling DataBreaches.net:

It was very simple to gain access to the 1st box that listed all the .us domains, and their ftp server logins. I went through each and every one, it was legit. I am pretty sure about every person who does security researching can do this, yes, it may have took me about 3 hours or 4 hours or looking around, but it is still possible.

Encryption was no obstacle for him, he said, because he saw no evidence that encryption was used at all: “I was able to read all of it in plain text form.”

As he acquired files, the teenager commented in a private chat on what he was obtaining:  Social Security numbers in one file, credit card numbers in another, postal and email addresses and phone number of Minnesota school board candidates in another, web-banking transactions from the First Bank of Ohio, and more, he claimed. 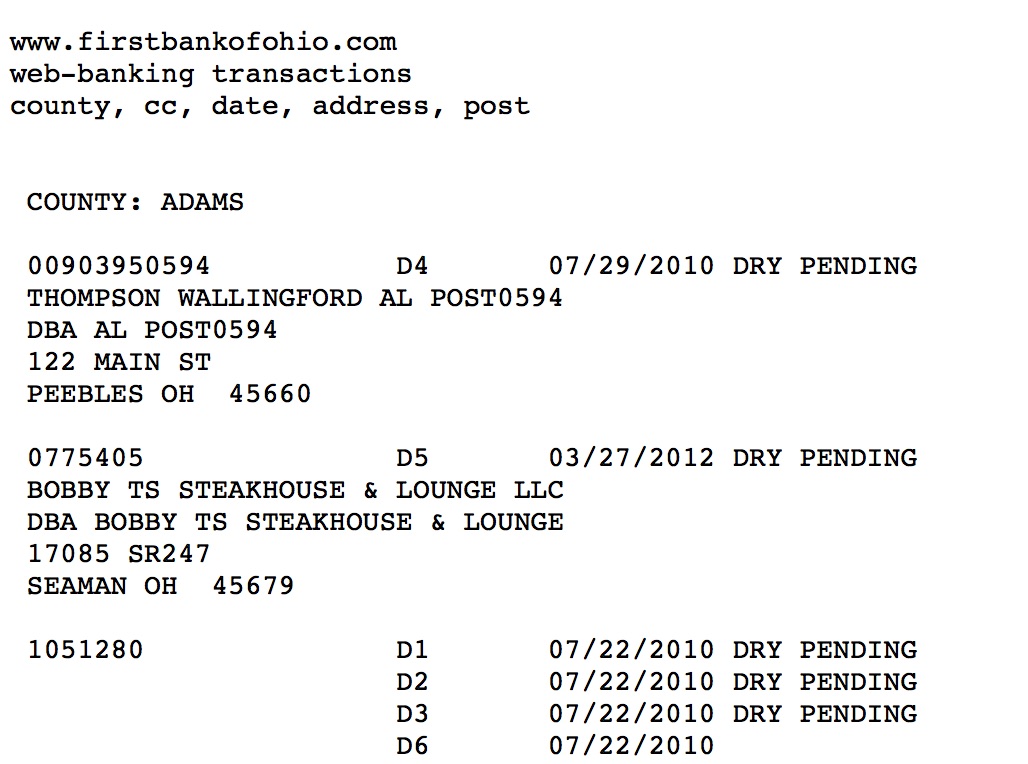 Web-banking transactions, First Bank of Ohio [UPDATE: These are not the bank’s records, as per the bank on 9-21-2016]
According to the teen, he was able to get customer credit card records from the bank because the state had access to the bank and he then went through several SQL tables:

The hacker seems to have paid particular attention to Florida.  Just one file alone from Florida had 267 million records, another had 76 million, he told DataBreaches.net.

“i just got access to a total of Social Security’, 101087939 numbers,” he claimed at another point, without indicating which state it was from.

When asked, the teenager, who prefers to be called “Fear,” claimed that he was also able to acquire voter registration databases. Although such databases are publicly available in many states, there has been growing concern about their too-easy accessibility and the risk that a hacker could tamper with the lists to corrupt the election process. Ironically, on Thursday, US-CERT issued an advisory on securing voter registration data in the wake of some highly publicized hacks.

Fear (also known as @hackinyolife on Twitter) claims that he was also able to access Florida’s pharmacy prescription monitoring program that is used for law enforcement purposes, telling DataBreaches.net in chat:

they had monthly reports on every citizen in Florida, and it included phone, address, name, SSN.

On inquiry, he noted that those records also contained the medication names and corresponding prescription numbers, but declined to provide any screenshots as proof.

Although he hasn’t done any counts yet, Fear estimates that he has already acquired a couple of thousand credit card numbers and millions of Social Security numbers.

When asked whether he was also acquiring state employees’ personnel information such as salary information, bank account numbers for direct deposit, etc., he replied that he was able to get phone numbers, addresses, names, and positions, but “sadly, not bank information.”

As to his intentions, Fear tells DataBreaches.net that he is dumping small portions of private data: “I’m still analyzing each file to make sure to separate private from public.”

When asked if he had any message for the states and .gov entities he had been able to access, he replied:

Nor, apparently, were some steps taken on Sunday to secure the data. At one point, Fear informed DataBreaches.net he had just tried to login but “they took the entire .us ftp server down.” Florida’s site was available again shortly after that, he reported, but it was now password-protected.

Too little, too late, though, it seems, as Fear told this blogger:

too bad they dont know its backdoored lOL…. they legit suck at security

According to Fear, he did not leave backdoors for other states – only Florida. That backdoor was removed last night.

A lot of damage can be done with 13 hours of access to a lot of states, though.

This story will be updated as more information becomes available.

CORRECTION: A previous version incorrectly captioned a screenshot as reflecting Washington data. The screenshot was from Alabama.

8 comments to “[CORRECTED and UPDATED] Hacking America: U.S. teen claims he had access to all state domains registered on .us TLD”