On July 9, threat actors calling themselves “Marketo” added a listing to their leak site for Talbert House in Ohio. Talbert House is an agency with a network of services focusing on prevention, assessment, treatment and reintegration for clients with a variety of issues. Their affiliates include the Council on Child Abuse of Southern Ohio (COCA), Gateways (an outpatient recovery center providing assessment, education and treatment services for adults struggling to cope with alcohol and/or drug use and mental health), and Health Care Access Now (HCAN) (providing access to health care for medically underserved populations).

According to their web site, last year, Talbert House served more than 21,000 clients face to face with an additional 96,000 receiving prevention and hotline services.

Whatever good karma they may have accrued wasn’t enough to protect them from a cyberattack. Marketo’s listing (below) provided some files as proof of claim, but they claimed to have 80 GB of data. 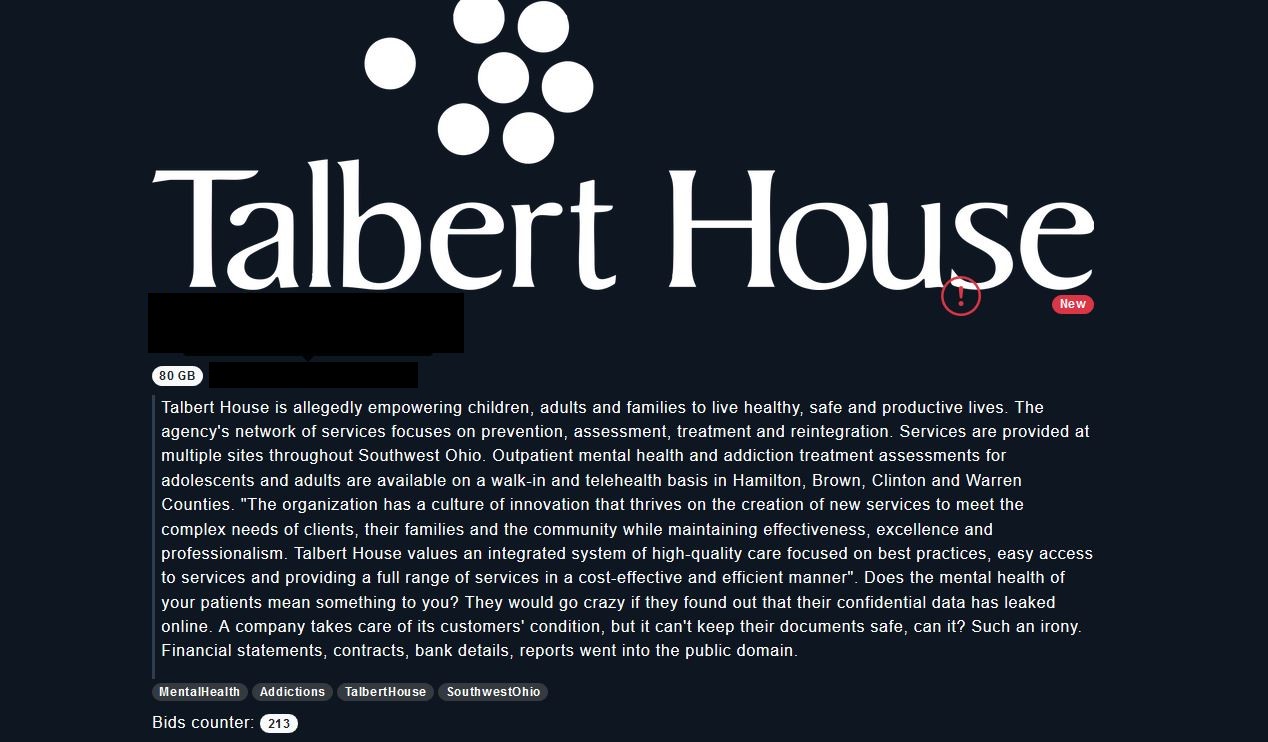 On July 15, not finding any notice on their web site, DataBreaches.net contacted Talbert House to inquire about the claims.  Later that day, Talbert House posted a statement about the incident. Their notice stated that they had first learned of a potential problem on June 11 and had found unauthorized access to their network. As of July 15, however, it seemed that they had not yet been able to determine what confidential data might have been accessed or exfiltrated.

At this site’s request, Marketo provided DataBreaches.net with exclusive access to some of the files that had been exfiltrated. The files provided to this site leave no doubt that at least some files with personal and sensitive information of clients and employees was acquired by threat actors.

Among the files provided to this site, we found some signed consent forms for participation in a grant program by the Ohio Commission on Fatherhood (OCF). The completed forms disclosed the participants’ name, social security number (SSN), date of birth, and signature.

The consent forms, however, were actually among the less sensitive information that this site viewed. One file contained of a chart audit for 2021 that listed the names of more than 80 clients. For some clients, the audit fields were filled in — fields that showed their (psychiatric) diagnostic codes, assessments of lethality of any suicide attempt, community support services or individual service plans, and other elements of a treatment and support plan for the person. Many of those named clients had psychiatric diagnoses that predict significant functional impairment and risk of social stigmatization.

Other files did not include details but provided the client’s name and SSN. And yet other files contained personal information on employees.

But again, this was just a very small sample of files that had not been publicly uploaded by Marketo.

Given the nature of the population served by Talbert House, a few comments about this incident seem appropriate:

1. Due to their circumstances and mental health issues or other challenges, many of these clients may be unlikely to monitor any credit reports or statements. That means that they are also unlikely to become aware if their identity information has been stolen or is being misused — until such time that they might try to seek services for themselves.  If and when they are notified of any theft or compromise of their information, I hope that they will also be provided with concrete assistance taking steps to protect themselves — i.e., someone assisting them with placing security freezes on their credit reports, etc.
2. If their data is misused, many of these clients might experience  great difficulty getting their records corrected so that they can get the services they need. Again, monitoring for signs of misuse should be provided as a mitigation service, and they should be offered restoration or remediation services.
3. Talbert House is a do-good agency serving the underserved. Why any criminals would think that an agency of this kind could possibly be able to pay ransom when they prioritize serving their clients and the community, well…. what have criminals accomplished? Are future victims more likely to pay because Talbert House’s data were dumped or sold, or because this site reported on it? No, they are not.

You can’t get blood from a stone.

Nor should you try to extort non-profits that serve underserved populations.