From the Washington Attorney General’s Office yesterday, a press release on an expansion of the breach notification requirements. Of special note, under the new law, a hacker acquiring a name in combination with a student ID would trigger notification obligations, but only if the information was not secured or made unusable (e.g., by encryption) AND  the breach is reasonably likely to subject consumers to a risk of harm. If there’s no reasonably likely risk of harm, then there is still no notification obligation, it seems — unless I’m reading the bill text incorrectly. I expect a number of law firms will be blogging about these amendments to the state law.

The bill expands consumer data breach notification requirements to include more types of consumer information. It also reduces the deadline to notify consumers to 30 days from 45 days. Rep. Shelley Kloba, D-Kirkland, sponsored the bill, which passed the House in a unanimous, bipartisan vote on March 1.

“My office has seen the number of Washingtonians impacted by data breaches increase year after year,” Ferguson said. “Data breaches are a serious threat to our privacy, and this law will arm consumers with information to protect their sensitive data.”

“Not only is the amount of data being collected and stored about consumers increasing, the number of breaches of secure storage of the data is increasing at an alarming rate as well.“ Kloba said. “This bill updates our consumer protection laws to shorten the notification time from 45 days to 30 days, so that consumers are made aware of a breach more quickly and can take protective action.  Additionally, companies who collect and store data will need to pay more attention to safeguarding it against internal and external threats.”

“Time and time again, millions of Americans have had their most private information stolen and abused due to poor corporate stewardship over the data we entrust them with,” Nguyen said. “This legislation will ensure that we have mechanisms for accountability put in place so that when a data breach occurs, we can act quickly and decisively to mitigate further harm.” 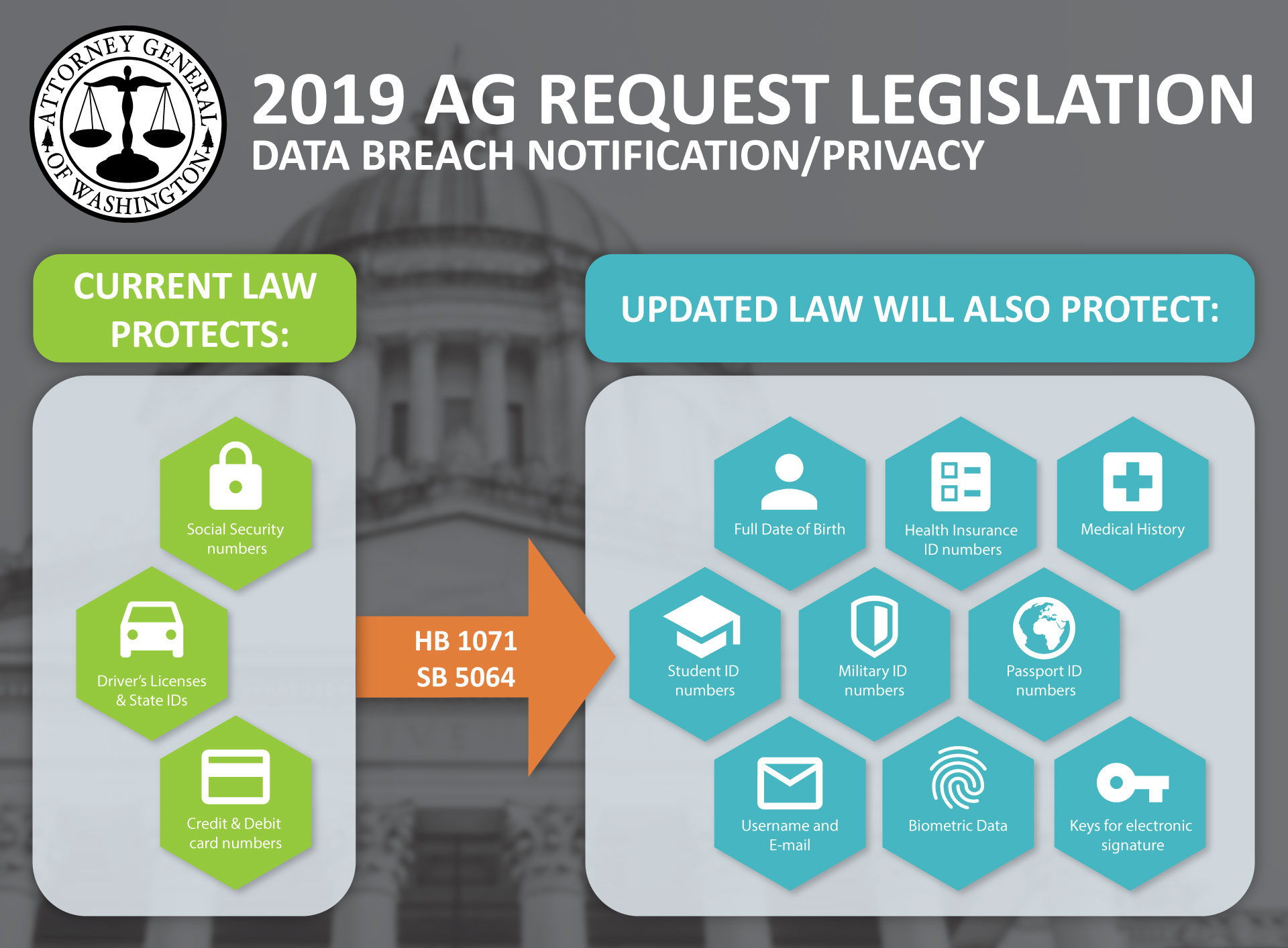 Without this new law, a business or government organization affected by a data breach is only required to notify consumers if a hacker obtains a consumer’s name in combination with social security numbers, driver’s license numbers, state ID numbers or financial account information.

The new law requires organizations to also notify consumers if a hacker accesses a consumer’s name in combination with the following:

The bill also requires notice to the Attorney General within 30 days of the discovery of a data breach.

Data breaches are a growing threat to Washington residents, businesses and agencies. Data breaches affected nearly 3.4 million Washingtonians between July 2017 and July 2018, a 26 percent increase over the previous year, according to the Attorney General’s Office third annual data breach report.